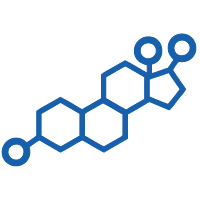 The following hormonal factors may affect a woman’s cancer risk:

Some pregnancy-related factors have been associated with a reduced risk of developing breast cancer later in life. These factors include:

Some factors related to pregnancy may increase the risk of breast cancer. These factors include:

If you or your mother was prescribed DES, you can learn more here: https://www.cancer.gov/about-cancer/causes-prevention/risk/hormones/des-fact-sheet

We are constantly sharing the latest findings on cancer prevention. Join the our Facebook alliance to stay informed and share the information with your network.

Have you had a cancer screening test at Premier, such as a mammogram or lung health scan? Encourage others to get scanned by leaving a review on Google, Facebook or Yelp.

1/2 of all cancer is preventable. Learn about lifestyle factors and how you can reduce your cancer risk.
Learn More