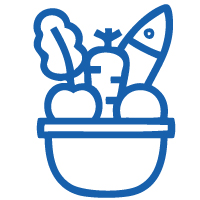 Although the evidence for links between individual cancers and consumption of non-starchy vegetables or fruit is limited, the pattern of association and the direction of effect are both consistent. Overall the evidence is more persuasive of a protective effect and that greater consumption of non-starchy vegetables and or fruit helps protect against a number of aerodigestive cancers and some other cancers.

Dietary patterns that are linked to a lower risk of cancer consistently feature high consumption of these foods.

An integrated approach to considering the evidence shows that most diets that are protective against cancer are rich in foods of plant origin.

There is strong evidence that diets containing greater amounts of ‘fast foods’ and other processed foods high in fat, starches or sugars are a cause of weight gain, overweight and obesity by increasing the risk of excess energy intake relative to expenditure. Greater body fatness is a cause of many cancers. Furthermore, glycemic load probably causes endometrial cancer independently of its effect on body weight.

‘Fast foods’ are readily available convenience foods that tend to be energy dense and are often consumed frequently and in large portions.

Most of the evidence on ‘fast foods’ is from studies of foods such as burgers, fried chicken pieces, chips (French fries) and high-calorie drinks (containing sugars, such as cola, or fat, such as shakes).

Most foods undergo some form of processing before consumption. More highly processed foods have generally undergone industrial processing and are often higher in energy and lower in micronutrients.

This Recommendation refers to processed foods high in fat, starches or sugars. These foods include:

This Recommendation does not imply that all foods high in fat need to be avoided. Some, such as certain oils of plant origin, nuts and seeds, are important sources of nutrients. Their consumption has not been linked with weight gain, and by their nature they tend to be consumed in smaller portions.

Eat no more than moderate amounts of red meat and little, if any, processed meat. There is strong evidence that consumption of either red or processed meat are both causes of colorectal cancer.

What is red meat?

All types of muscle meat from a mammal, including beef, veal, pork, lamb, mutton, horse and goat.

What is processed meat?

Meat that has been transformed through salting, curing, fermentation, smoking or other processes to enhance flavor or improve preservation. Processed meat can include ham, salami, bacon and some sausages such as frankfurters and chorizo. Minced meats such as fresh sausages may sometimes, though not always, count as processed meat.

Should I give up red meat?

Red meat is a good source of protein, iron, and other micronutrients. But, eat lean meat, not fatty cuts. Poultry and fish are valuable substitutes for red meat. Eggs and dairy are also valuable sources of protein and micronutrients.

This Recommendation is not to completely avoid eating meat. Meat can be a valuable source of nutrients, in particular protein, iron, zinc and vitamin B12. However, eating meat is not an essential part of a healthy diet. People who choose to eat meat-free diets can obtain adequate amounts of these nutrients through careful food selection.

People can obtain adequate protein from a mixture of pulses (legumes) and cereals (grains). Iron is present in many plant foods, though it is less bioavailable than that in meat.

The specified amount of red meat provides a balance between the advantages of eating red meat (as a source of essential macro- and micronutrients) and the disadvantages (an increased risk of colorectal cancer.)

There is convincing evidence that consumption of sugar sweetened drinks causes weight gain, overweight and obesity in both children and adults, especially when consumed frequently or in large portions. Sugar sweetened drinks do this by promoting excess energy intake relative to energy expenditure.

To maintain adequate hydration, it is best to drink water or unsweetened drinks, such as tea or coffee without added sugar. There is evidence that coffee probably protects against liver and endometrial cancers.

Fruit juices should not be consumed in large quantities, as even with no added sugar they are likely to promote weight gain in a similar way to sugar sweetened drinks.

Do not use supplements for cancer prevention

A dietary supplement contains a ‘dietary ingredient’ intended to achieve levels of consumption of micronutrients or other food components beyond what is usually achievable through diet alone.

Randomised controlled trials of high-dose supplements have not consistently demonstrated the protective effects of micronutrients on cancer risk suggested by observational epidemiology. Furthermore, some trials have shown potential for unexpected adverse effects. The Panel is confident that for most people consumption of the right food and drink is more likely to protect against cancer than consumption of dietary supplements.

This recommendation applies to all doses and formulations of supplements unless recommended by a qualified health professional who has accessed potential risks and benefits.

When supplements are advisable

The Panel recognises that dietary supplements, in addition to varied diets, may at times be beneficial for specific population groups:

We are constantly sharing the latest findings on cancer prevention. Join the our Facebook alliance to stay informed and share the information with your network.

Have you had a cancer screening test at Premier, such as a mammogram or lung health scan? Encourage others to get scanned by leaving a review on Google, Facebook or Yelp.

1/2 of all cancer is preventable. Learn about lifestyle factors and how you can reduce your cancer risk.
Learn More